The Mercedes-AMG Petronas Formula One (F1) Team, also known as the “Silver Arrows,” has bowed to the controversy surrounding the troubled cryptocurrency exchange FTX. The home of seven-time world champion Lewis Hamilton has suspended its partnership with FTX.

Mercedes signed a sponsorship agreement with FTX in September 2021, when they were the reigning champions. The cryptocurrency exchange has been engulfed in a liquidity crisis that has spiraled out of control.

According to reports, the team has stated that it will remove the FTX logo from its vehicles after the company filed for chapter 11 bankruptcy this week.

“As a first step, we have suspended our partnership agreement with FTX. This means the company will no longer appear on our race car and other branded assets from this weekend. We will continue to monitor closely the situation as it evolves,” a team spokesperson said.

The funds will be available through the WisdomTree Prime mobile app in the first quarter of 2023.

On twitter, Peckshield clarified that the audit report posted by DxDy was forged from its earlier audit on dYdX. 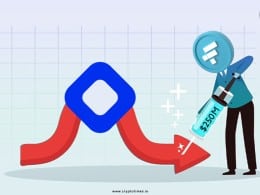