Rarible, a nonfungible token (NFT) marketplace, announced on Wednesday that it had integrated with Tezos, a proof-of-stake blockchain.

Now Rarible will be able to sell Tezos NFTs on its marketplace, as well as offer secondary sales of live Tezos projects, allowing users to mint low-cost NFTs.

Before this integration, Rarible introduced a new feature called “lazy minting” in mid-October that allowed users to create NFTs for free.

Tezos’ integration with Rarible is the platform’s third layer one blockchain, following Ethereum and Flow.

According to Rarible CEO Alexei Falin, integrations with Solana and Polygon are next in Rarible’s quest to establish a multi-chain platform to consolidate the NFT industry.

He also said that, “Rarible firmly believes that the future of NFTs is cross-chain, and that interoperability is the key to a streamlined, successful NFT ecosystem. We have seen many alternative blockchains gain traction in the NFT space for their unique offerings, specifically Tezos for its low costs and energy-efficient minting process through proof-of-stake validation.”

According to the corporation, the integration will take place in two stages. Starting with in-game metaverse collectibles called Digits from legacy gaming company Ubisoft, users can now mint, buy, sell, and trade new Tezos NFTs, as well as trade on the secondary market. Rarible will then use bespoke contracts to create new collections and set up royalties for imported collections that were previously available on Tezos.

Diane Drubay, founder of We Are Museums and a minter of NFTs on Hic Et Nunc, has curated an inaugural NFT collection called “Blazing Futures”, which Rarible and Tezos have launched.

The Blazing Futures release includes work from ten Tezos-based artists that is only available through Rarible.

Rarible will immediately support secondary sales for Digits, the first NFTs playable by Ubisoft. Users will be able to acquire them even if they missed its original drop.

Unlike direct staking on the Ethereum network, which requires 32 ETH, Binance.US only requires 0.001 ETH.

Accenture Invests in Strivr for Immersive Learning in Metaverse

The strategic investment comes a day after Accenture revealed plans to hire 150,000 employees in India to work from the metaverse. 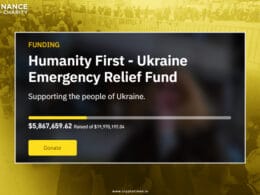 Binance launched a Ukraine Emergency Relief Fund in the form of a crypto-first crowdfunding site where you can donate your crypto for the welfare of refugees.