Kujira Announces Launch of its Stablecoin $USK on Cosmos

Among the extreme market conditions, Kujira, a crypto project, announced the launch of its stablecoin USK on Cosmos.

Kujira was first building its project on Terra blockchain, but after the collapse of its ecosystem, the project was migrated to layer 1 protocol Cosmos.

The $USK is the over-collateralized Cosmos stablecoin, which is soft-pegged to the USD and initially, it will be backed by $ATOM. However, later on, $USK will also be backed by Kujira’s native token, $KUJI.

In a blog post, the Kujira team revealed that the inspiration to develop USK came from the decentralized lending protocol MakerDAO and its stablecoin DAI.

Before the fall of Terra, Kujira developed ORCA to provide high capital efficiency to Anchor liquidations.

The project team is confident about their robust and reliable model for a stablecoin that will make $USK more sustainable in the DeFi ecosystem.

It was revealed that, in spite of Solidity, their algorithmic stablecoin was created utilising the more robust language Rust.

“As we plan to focus on payments and commerce and launch our own high-quality Kujira wallet, we felt that we would have far more flexibility for future integrations if we were able to launch our own native stablecoin,” the announcement said.

“We rebuilt Kujira from the ashes of Terra Classic’s collapse. We understand just how important it is to handle a stablecoin correctly by pursuing transparency, community involvement, sustainable governance, while focusing on adoption and tangible value.”

Unlike most stablecoins, $USK is not backed by other stables as it strives to be sovereign and uncensorable. The stablecoin will leverage the high liquidity of $ATOM on Cosmos and take it as collateral.

According to the announcement, $USK, and ORCA will be launched on Testnet on August 10 for quality assurance and testing purposes for 2 weeks. 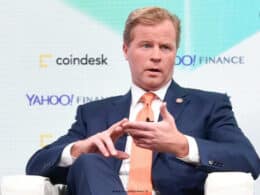 Brian Quintenz Steps Down from the Role Of CFTC Commissioner

Brian Quintez is resigning as a Commissioner of the CFTC on August 31, 2021.

The Sandbox Plans to Raise $400M at a $4B Valuation

The details about Sandbox’s funding round’s size and valuation are still being considered, and they may change depending on market sentiments and investors interest.

The platform intends to expand its operations and hire new talented workforce with the newly raised funds.

In appreciation for the vast community support, Moonbeam has increased the rewards payout by 50% for all participants.
Total
4
Share