Dfinity Foundation’s Internet Computer blockchain is going to introduce smart contracts capabilities to the Bitcoin (BTC) network, which will help the prominent cryptocurrency Bitcoin to grow. Implementation is currently set for Q4 2021.

In this integration process, The internet computer will adopt chain key cryptography to integrate with Bitcoin, which will provide a medium for smart contracts with native BTC addresses. This address will be the same as the addresses hosted by Internet Computer.

The Internet Computer community passed a Network Nervous System (NNS) proposal on September 17 with 96.55% approval. It was already the 20,586th proposal sent to the NNS since the network launched in May.

Smart Contract on Internet Computers will have to carry adequate BTC addresses, which will give them direct access to transactions on the bitcoin blockchain. This transaction process will take 2 seconds for completion which is less compared to 40 minutes on Bitcoin. These “Bitcoin Banks” can be directly utilized on the Internet Computer.

At the beginning of this year, Dfinity Foundation had initiated a $223 million Developer Ecosystem program to help smart contract and Blockchain development. In this project, leading crypto ventures firms had provided financial support.

Dfinity is putting this effort to make easy access for Bitcoin to transactions, decentralized finance, and Web 3.0. At present, Bitcoin has emerged as a prominent alternative asset and it has capitalized $1 trillion in the market. This upgrade had received a lot of support from mining nodes.

Several other developers are in the process of delivering new applications ahead of Bitcoin’s Taproot upgrade later this year. The upgrade received huge support from mining nodes, paving the way for soft-fork activation in November.

Brave Browser aims to provide better user experience by replacing fake extensions with a browser-native one.

The funding will help bolster its efforts at creating and developing its DeFi configurable indices. 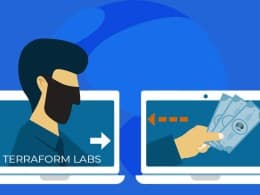 The parent company of Terra ecosystem, Terraform Labs, is currently under multiple investigations from South Korea regarding possible…

Over 150 companies joined the committee to guide the development of the metaverse projects and curb its speculation.
Total
6
Share