At the Korea Blockchain Week 2022, the CEO of Mythical Games, John Linden, emphasized on the ‘play-and-own’ mode. He said that the firm which has also developed Blankos Block Party focuses on in-game assets rather than the earning aspects of its games.

Linden said, “We are going to play a little bit with very specialized tokens, but we don’t really call it ‘play-to-earn.”

“The way we talk about it now is ‘play-and-own’ because, again, we’re really more focused on the assets”, he added.

Linden further explained that the firm believes that the focus must be on ownership and the ability to trade and sell these [assets] as the characters hold natural value in themselves.

Note that Linden’s comment holds much weight considering the fact that the emerging play-to-earn gaming industry is quickly turning to a ‘play-and-earn’ model. The games are thus consistently focusing more on developing the ‘fun part’ of their gameplay.

Daiki Moriyama, director of blockchain-based game infrastructure firm Oasys too had a take on this.

Moriyama recently commented that play-to-earn games have not been viable to date because the supply and demand within the ecosystem was not designed properly and was only funded by the initial investment from new users.

In October 2021, ProShares launched BITO, the first Bitcoin-linked ETF in the United States, which received more than $1 billion in assets in just two days.

Huobi may also lay off 30% of its workforce due to "a sharp drop in revenue" because of the removal of all Chinese users.

Greenidge expects a net loss of approximately $30M driven by the merger with Support.com. 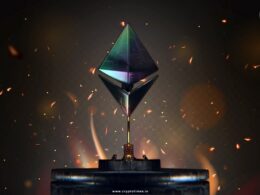 Currently, more than $65 million worth of ETH is being burnt daily by the Ethereum network.
Total
1
Share