The Luna Foundation Guard (LFG), a newly formed non-profit organization dedicated to promoting decentralization and the expansion of the Terra ecosystem, has announced the sale of a $1 billion private token sale off-exchange, to be used in the establishment of a UST Forex Reserve denominated in Bitcoin.

Jump Crypto and Three Arrows Capital led the fundraising – one of the largest in the crypto sector’s history, with Republic Capital, GSR, Tribe Capital, DeFiance Capital, and other unnamed investors also taking part.

This purchased LUNA – locked up for a four-year vesting period, will serve as a release valve for UST redemption in order to keep the USD price pegged.

Terra said it chose to denominate the Forex Reserve in Bitcoin because it considered the crypto asset “less correlated to the Terra ecosystem” and considering the criticism faced by algorithmic stablecoins.

Kanav Kariya, president of Jump Crypto, said that the reserve mechanism “is similar to how many central banks hold reserves of foreign currencies to back monetary liabilities and protect against dynamic market conditions.”

Terraform Labs, the company behind the Terra blockchain has established a non-profit organization known as LFG to support the Terra ecosystem and ensure the stability and adoption of its most popular stablecoin, UST. It is an algorithmic stablecoin that has gained popularity in DeFi ecosystems.

Terra announced earlier this month a $40M partnership with Major League Baseball’s Washington Nationals to allow fans to pay in UST at the team’s home stadium, National Park, in the upcoming season.

Christie’s to Auction Art Blocks Curated NFTs Only in ETH

$33.5 Billion Worth of ETH ‘locked’ in Single Largest Ethereum Contract

The contract is an Ethereum 2.0 Beacon Chain staking contract and cannot be spent without a hardfork.

Hublot to Accept Crypto Payments for its Limited Edition Watches

Clients will be able to shop with chosen cryptocurrencies with BitPay exclusively on the Hublot United States eBoutique. 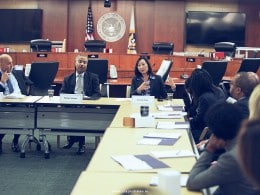 The meeting has been organized under the title “Helping to Ensure Investor Protection and Market Integrity in the Face of New Technologies.”
Total
0
Share