On Monday, the global investment bank Goldman Sachs has noted that Coinbase’s current bear market won’t be ending anytime soon and that it could face further degradation.

Shares of Coinbase dropped around 11% yesterday and are down 86% from their record high. As per reports, the bank predicted that this trading activity could drop due to falling inflation and the collapse in the crypto market.

Yesterday, Goldman Sachs analyst Willam Nance downgraded Coinbase’s stock rating to sell from neutral and reduced its price target from $70 to $45 price target. As a result, a 5.7% drop was seen in Coinbase stock to $59.40.

The bank explained that the steep fall in cryptocurrencies will affect the trading volumes severely, and would make it difficult for exchanges like Coinbase to thrive.

The bank also elaborated on how sentiments have been crushed in the crypto industry after several big stablecoin breakdowns causing losses of billions of dollars for investors, and increased monitoring will possibly depress Coinbase’s revenue further.

Taking into account, the live crypto asset value and trading volumes, Nance has made predictions that Coinbase’s revenue will fall 61% year over year in 2022.

The note further declared that even though Coinbase laid off 18% of its employees these cost-cutting measures will likely not be enough, and more job cuts are likely to happen.

Nance said, “We believe Coinbase will need to make substantial reductions in its cost base in order to stem the resulting cash burn as retail trading activity dries up.”

Nance further added that the company’s large stock based compensation program could lead to significant shareholder dilution. This can result in a talent drain as its stock turns less appealing as a substitute for payment to employees.

Nance said that from a valuation viewpoint, Coinbase is trading at the market cap of $11.5 billion as compared to its ~$3.8 billion net cash position.

Considering this, Nance believes valuation support is constrained as higher revenues in the near term would require higher crypto value and the bank ‘forecasts breakeven to negative adjusted EBITDA over the next several years’.

The fund is backed by Nine Masts Capital, a Hong Kong-based hedge fund.

The Foundation will formally dissolve within the next few months. 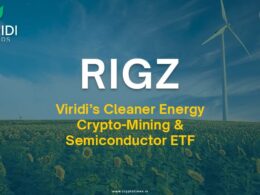 $RIGZ: The Viridi Cleaner Energy Crypto-Mining & Semiconductor ETF is out

$RIGZ is the world’s first ETF that primarily invests in companies involved in #bitcoin mining while utilizing a clean energy filter. 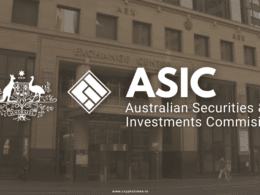 Based on the guidelines, ASIC has approved ETPs based on Bitcoin and Ethereum.
Total
1
Share