Well, NBA teams have now joined the list of partnerships with FTX that are coming to an end. The Golden State Warriors will halt all FTX-related promotions, as well as in-arena promotions and advertisements.

The NBA team is ending a $10 million sponsorship agreement signed in December 2021. The final promotion for the game will be the Jordan Poole bobblehead giveaway at the Chase Center.

Over the weekend, the rival NBA team, the Miami Heat, severed ties with the failed exchange. It had paid $135 million for the naming rights in a 19-year deal.

Vitalik Buterin Calls Out Yet Another PoW Proponent

Ethereum co-founder Vitalik Buterin calls out yet another PoW proponent about their false idea about the PoS system.… 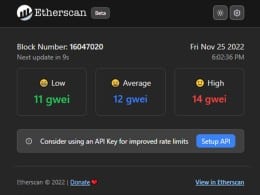