The blockchain Cardano will undergo its Vasil hard fork on September 22, announced its founder Charles Hoskinson on his Youtube vlog.

Vasil is the most significant upgrade on Cardano and was originally slated to occur in June this year. The hard fork has been rescheduled twice until now.

The R&D company, Input Output Hong Kong(IOHK) behind Cardano along with Cardano Foundation also wrote that three critical mass indicators have been reached-

Of the top 12 crypto exchanges, IOHK announced that MEXC and Bitrue are ready while Binance is “nearly there” and Upbit, Coinbase, WhiteBit, BKEX and HitBTC are “in progress.”

The Foundation also said that it is confident of meeting the 80% liquidity metric. “We anticipate a seamless technical transition, with no disruption for its users or a break in block production.”

Developers have said that this upgrade would result in greater scalability and lower fees. The hard fork will also incorporate the first major upgrade to the Plutus script (the programming language used for smart contracts on the Cardano blockchain).

Hoskinson said on his Youtube vlog that “if we’ve all done our job right, we will wake up on Sept. 22, and it will be just another day.”

He further added “We started and knew that, over time, we could get to what Ethereum has done, but we understood a road map to get there. […] There’s a lot of things on the horizon, especially in 2023.”

The Vasil upgrade is named in honor of a Bulgarian member of the Cardano community, Vasil Dabov who died in 2021.

Alphabet CEO Spoke Of the Company’s Position in Web3 Development

Blockchain technology and its elements will play a crucial role in the Web 3 developments. 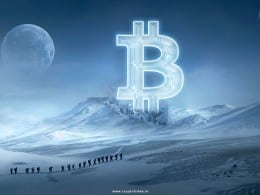 Blockchain technology and the digital asset ecosystem are here to stay, concluded the bank.

Based on market value, the listed reserves had a total market value of around $69 billion.
Total
0
Share