An Ethereum scaling protocol ZkSync passed its first security audit in preparation for expanding access to users by the end of this year. A leading crypto auditing firm OpenZeppelin conducted the audit which took place over a four-week period.

After the worst hacking year in crypto history, it has become essential for new protocols to conduct security auditing. ZkSync has taken a vital step by adding an extra layer of trust in its network security for builders and users of protocols.

ZkSync is also planning to have additional security measures over the next several months including contests, bug bounties, and hackathons.

Even several well known DeFi protocols such as Uniswap and Aave have committed to launch on zkSync. The audit enables protocols and users to have more trust in expanding to the new network and transacting on them.

US Department of Labor Warns About Crypto in 401(k) Plans 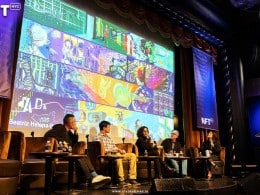 Snoop Dogg hinted that the team may be displaying a few NFT projects on the Time Square billboards as part of the NFT NYC event promotion.

The REC director emphasized the need of creating a Sandbox “in order to identify all possible risks in terms of regulation and technology.”

Arbitrum Confirms that Launch of its Native Token is Rumor

Arbitrum has Total Value Locked (TVL) of over $2.2 billion due to Staking reward on ArbiNYAN.
Total
0
Share