What Is Terra 2.0? Know Everything About LUNA 2.0 Airdrop!

The Terra (LUNA) blockchain has seen a miraculous rise and fall over the last few months. But Do Kwon has no plans to stay down, having secured backing from crypto exchanges to help it rebuild. We’re all waiting for Terra’s 2.0 updates. So, what exactly is Terra 2.0?

As the Terra 2.0 testnet goes live, the mainnet launched on May 27 as a part of a revival plan devised by Terraform Labs and co-founder Do Kwon, potentially making the LUNA 2.0 available for trading.

We will walk through Terra 2.0, the new chain that will replace the old chain. What will happen to the Terra blockchain? What does this mean for holders of UST and LUNA tokens?

Do Kwon outlined the Terra Ecosystem Revival Plan in a post on Terra’s Research Forum, and it is being updated as they figure out Terra’s future.

Terraform Labs CEO Do Kwon proposed creating Luna (LUNA) 2.0 tokens on a new blockchain, dubbed the “rebirth” plan and tagged as “building the future of money”.

Although the original plan was undergoing an on-chain vote & being amended at the same time, the community voted and accepted the proposal ‌with input from the Terra Builders Alliance (TBA) after Kwon amended it.

The final proposition was approved by 65.5% of those who voted (305,975,278), 20.98% abstained from voting, and 13.20% rejected it by “veto” on May 25th. Additionally, several validators on the Terra blockchain voted no, including blockchain infrastructure companies blockscape, Stake Systems, and DSRV.

By the look of things, the ultimate goal of Terra is to be a community-owned blockchain. The wallet addresses of Terra FormLab and Luna Foundation Guard (LFG) will be removed from the Airdrop whitelist.

According to “Proposal 1623”, the Terra team wants to create a new chain without the algorithmic stablecoin. So they’re effectively preserving the technology behind Layer 1 but not using the stablecoin mechanism that caused the LUNA death spiral.

The LUNA token will be airdropped (given away for free) proportionally at a pre-determined percentage to holders across all Luna Classic stakers, holders, residual UST holders, and Terra Classic essential app developers will also be eligible for the LUNA Airdrop.

Is Terra 2.0 a hard fork? Well, Do Kwon essentially wants to reconstitute the Terra blockchain, preserving it while creating a new chain entirely, rather than forking it.

Also, the decentralized applications built on Terra Classic would not exist on the new Terra (LUNA) chain by default. The Dapps must be migrated to the new chain. Surprisingly, many Terra projects have announced that they will re-deploy on the new Terra blockchain. So, if you have a Terra project, you now have a choice.

Suppose, if you are, say, one of the projects on the old Terra chain, such as Astroport or Anchor Protocol, you now have the option of deploying on the new chain or packing up the ship and deploying elsewhere.

Let’s discuss the native token LUNA on the new mainnet Terra 2.0 because it’s one of the hottest burning topics right now.

Who Gets the LUNA 2.0 Token Airdrop & How Much?

LUNA will be airdropped on the Terra 2.0 to eligible LUNC, USTC, and aUST holders. The following information about the airdrop will help you determine if you are eligible.

Terra 2.0’s native asset, LUNA, will be airdropped to four groups that will be eligible for the reward:

How much new LUNA will you get for each category?

What is worth noting about the LUNA 2.0 Airdrop details?

Prior to the collapse of UST, investors who owned fewer than 10,000 LUNA (now LUNC) or deposited UST in Anchor, along with post-attack users with any amount of LUNA or UST, will get LUNA tokens on a regular basis to avoid immediate selling.

Over 30% of their tokens would be unlocked right away, with the remaining 70% released over the course of two years, with a six-month cliff in the middle.

It does not end here, though. The “rebirth” plan includes that ‌the Airdrop will take place in a “bonded state”, so transfers will be available after a 21-day unbonding period.

At the very least, Terra 2.0 will be the heart of the wider Cosmos ecosystem, according to Orbital Command, a validator who is “dedicated to educating the Terra LUNA community”. Users from Cosmos will transfer their assets to Terra 2.0 for clustering, options, refracting, and lending/borrowing.

Terra 2.0 is the Terra team’s bold revival strategy, but whether it will pay off is debatable. Since the crash, Terra’s reputation has taken a hit, and many people are wary of the network.

There are definitely some members of the Terra community who are vocal supporters of any revival efforts. But, with lawsuits and investigations pending, it’s questionable whether Terra will ever reach the heights of its original network.

When will you receive the LUNA 2.0 airdrop?

The first airdrop will happen on the day of the Genesis of the new blockchain, i.e., May 27th, 2022.

Which Centralized Exchanges (CEXs) are supporting the Terra 2.0 re-deployment?

The following CEXs will be supportive in the airdrop at Genesis of Terra 2.0:

Which Terra Classic projects & protocols are supporting the Terra 2.0 re-deployment?

During press time, here is the non-exhaustive list of the projects in support of the new Terra chain: 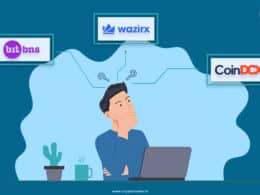 As a newcomer to crypto, you must be wondering where to start. The first thing you need is…

“A strange new world where your actions hold consequences, normal rules cease to exist, and then… On the…

Are We In a Crypto Bear Market?