What does the year 2022 have in store for NFTs?

NFTs have taken the decentralized world by storm, with the NFT market generating over $23 billion in trading volume in 2021. Not only that, the involvement of influential personalities has thrown NFTs into the limelight, sparing no one from its grip. Undoubtedly, 2022 will surely be the year when people from all walks of life truly begin to embrace NFTs and fully utilize the potential of blockchain.

NFTs have been making a lot of noise lately with some, or the other project surfacing over the course of the year. These blockchain-based artworks from JPEGs to looping animations have fetched tens of millions of dollars.

2021 has been the best year on record for the NFT enthusiasts and artists alike. Even tech firms, fast food-chain companies, fashion brands, real estate, gaming industry, etc are neck-deep in NFT space.

Following are some predictions on what 2022 holds for NFTs.

Play-To-Earn games fueled by in-game NFT collectibles have driven the gaming economy in 2021. Wolf Game is one such game that exploded in popularity in no time because of its rewarding gameplay. Axie Infinity also gained recognition in the gaming community with its Play-To-Earn feature in which players can make thousands of dollars battling Pokemon clones. Ubisoft, also came forward with in-game NFTs termed ‘Digits’ which players can trade across its platform to earn rewards.

There are many initiatives towards integrating NFTs in video games that we will soon see in 2022. Several giant gaming firms are in a race to advance the gaming experience for their users. It can be concluded that Play-To-Earn NFT games have the potential to take over the conventional gaming system.

When a 17-year-old social media platform like Facebook changes its name to Meta, then clearly, we should not doubt its intention of turning to the metaverse. In no time, a concept rooted in science-fiction will come to reality with so many companies from various domains planning to explore the metaverse.

Following the suit of Meta, sports giants Nike and Adidas also hopped on the metaverse bandwagon. Nike made a grand entry into the metaverse in collaboration with virtual shoe company RTFKT to create next-generation collectibles. Whereas, Adidas teamed up with Bored Ape Yacht Club, gmoney and PUNKS comic to create the metaverse NFT series. These 30,000 metaverse NFTs were sold for 5924 ETH collecting over $23 million in profit.

Snoop Dogg is always one step ahead of all, his arrival in the metaverse was marked with his “Snoopverse LANDs auction” in The Sandbox, a metaverse giant. The sale fetched $14 million worth of revenue on the very first day. As if that wasn’t enough, the neighbouring plot of his Metaverse mansion sold off for a whopping $470k. This is just a start, many firms will soon begin shifting to the metaverse and 2022 holds a good opportunity to indulge in it.

The unprecedented emergence of NFTs has transformed how people perceive art. Well. art is what brought NFT in trend, but its other usage that extended to music, movie, memes and ultimately metaverse, have piqued everybody’s interest.

Most people think NFTs are only purchased to enjoy ownership rights that come with it to claim the piece of art as their own. This perception about NFTs is not only wrong but also reflects a lack of awareness among people. Let’s understand how NFTs are more than digital artworks before it’s too late to catch up with upcoming NFT trends in 2022.

CryptoPunks, a collection of 10,000 collectible pixel characters on the Ethereum blockchain had zero to no recognition when it was released in 2017. These punks were free to claim, for all the  Ethereum wallet holders. All 10,000 of them have been claimed and now they sell for a great deal of money. Who would have guessed that these punks would be used as profile pictures by celebrities, business leaders, and athletes on various social media platforms? If you possess even a single Cryptopunk, that makes you a millionaire.

Basically, NFTs are not limited to artworks but now they are also used as a status symbol. In a way, it is also a good investment tool, as these Crytopunks can be traded at secondary marketplaces generating revenue.

The project similar to CryptoPunks is the Bored Ape Yacht Club (BAYC), which is also a collection of 10,000 cartoonish apes. Their price has risen high in a matter of months when famous folks such as Steph Curry, Dez Bryant, Josh hard and many others adopted it as their NFT avatars. The added advantage of these NFTs is that the owner gets exclusive Intellectual property (IP) rights which can be used to commercialize NFTs.

With the pace these NFT collections are being embraced, expect to see more celebrities, musicians and corporate leaders adopting NFT personalities in 2022. Also don’t be surprised, when you see these NFTs across media in television, films, games, music and more in the year ahead!

With the rise of DeFi and NFT, a new investment instrument emerged. NFTs were first used by lending platforms for collateralized liquidity. In fact, there are now markets for loans backed entirely by NFTs.

Users can use their NFTs as security for loans or offer loans to other users using their tokens as collateral. This is possible because NFTs have a market value and can be exchanged, auctioned, and valued individually based on their rarity, attributes, and utility.

The best example is the Aave protocol, which proposed to accept loot NFT as collateral. Several initiatives, such as NFTfi, have been created for this aim. It enables users to deposit and/or withdraw NFTs as collateral in order to borrow an amount of ETH offered by other users.

When we talk about artists, their fans and appreciators contribute a tremendous amount of support to build the hype. This brings us to our next point: NFTs have become a buzzword that all superfans were humming all round the year.

The effect of this craze was quite visible when Beeple sold an NFT for a stunning $69 million at Christie’s. Murat Pak, an anonymous NFT artist, made headlines when his ‘merge’ NFT brought 91.8 million in sales, breaking all records that were ever made.

There were many instances of record-smashing NFT sales, from several NFT artists whose fan base is entirely based on the unique art they create. Here is a list of top NFT creators that you should keep an eye on in 2022, as much bigger NFT projects are anticipated that would be worth millions.

Murat Pak, a mysterious NFT artist with a hidden identity whose artworks are as cryptic as his persona. He’s known for his uncanny taste in NFTs; all of his pieces are more than just artwork; they’re a portal to a world of intriguing possibilities.

One such crypto art “The Fungible” was Sotheby’s first NFT sale that fetched around $17 million over a three-day drop. His other NFT project “Lost Poets” brought in almost $70 million in NFT sales in just 2 hours.

That’s not all, his latest project seems to be breaking all the records ever made by any living artist. His most recent “Merge” NFT crossed over $90 million in 48 hours, becoming the largest sale ever, which also ranked him first in the list of most expensive NFTs of the year.

He with all his artworks has shifted the attention from artist to art itself. Interestingly, he has sold 66,319 artworks in 2021, demonstrating the popularity of his NFTs. It goes without saying, Pak will continue to usher into the NFT space’s upper echelons in 2022.

Mike Winkelmann, who goes by the name Beeple, is another NFT artist on the list who is worth following for his amazing crypto art in 2022. It all started when his NFT “The First 5,000 Days” gained over $69 million in sales. Since then, the NFT industry boomed and more artists took inspiration from him to create crypto art. His other NFT drop “Human One” also sold for $28.9 million.

His unique artworks have gained him a huge following on social media. In the coming year, it would be interesting to see how Beeple will unfurl more such amazing crypto art.

XCOPY, a crypto artist who was all over NFT space by the end of the year. The hype went too far when rapping sensation Snoop Dogg purchased the animated Ethereum NFT “Some Asshole” for 1300 ETH by XCOPY.

Followed by another NFT meme art “Right-click save As guy”  from XCOPY which Snoop bought for 1600 ETH which is about $7 million. In 2021, XCOPY sold over 1916 artworks, indicating that sales will surely pick up next year. If Snoop can’t resist XCOPY’s artworks, then we can’t even afford to miss out on his upcoming NFTs in 2022.

Victor Langlois, popularly known as Fewocious is a 19-year-old NFT artist who emerged as the show stealer in 2021. His NFTs are funky colorful drawings that represent snapshots of his memories and his passion for creating art that resonates with anyone looking for artistic depth.

Some of his NFTs are I Taught Myself How To Fly, When a Child Feels Lost, My Mama’s Dream, Overthinking Again and so on. The title of NFT speaks for itself; with his exquisite refreshing art, he has voiced his raw emotions.

In barely over a year, these NFTs had grossed over $17 million. This young rising artist will undoubtedly make it to 2022 with fantastic art creations that the NFT community has been anticipating!

In 2021, many budding artists came to the forefront of the NFT space and have been acknowledged for their work. It has only been possible because NFTs kept on surging in popularity and value throughout the year.

Considering that, many famous folks joined the trend by auctioning their autograph, tweets, video clips and more abstract things online in NFT format. Though other applications of NFTs such as integrating them in video games and metaverse still have a long way to go. Nevertheless, NFTs will continue to drive the crypto space in 2022 with innovations and initiatives.

As they do in other new and established sectors, certain platforms have positioned themselves as the main highlight… 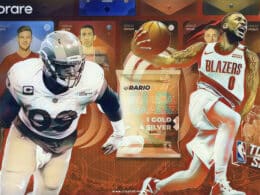 NFTs in sports are exploding. More and more athletes, clubs, and sports are getting on the Crypto collectibles…

The Alonzo upgrade for Cardano gets the network considerably closer to its maximum potential. Unlike Ethereum or Bitcoin,…

The balancer is an automated market maker (AMM) protocol built on the Ethereum blockchain. It has its own…
Total
19
Share