Ethereum co-founder Vitalik Buterin publishes a blog post on how stealth addresses could improve the state of privacy on Ethereum.

Buterin stated that one of the largest remaining challenges in the Ethereum ecosystem is privacy. He added that the Ethereum wallet will be able to create stealth addresses to receive money discreetly and gain access to it via a unique code known as a “spending key.”

Although either party can create the proposed stealth addresses, only one can control them. In order to create a stealth meta-address that can be sent to the sender, the person receiving the assets must first generate a stealth address and maintain a spending key hidden.

As a result, the sender can compute this meta-address to establish a stealth address for the recipient. The recipient will then have complete power while the sender is free to send any assets they like to this address.

Along with the transfer, the sender posts some more cryptographic evidence on-chain proving that the recipient is the owner of the stealth address.

According to Buterin, using a stealth address has the same privacy benefits as creating a new address specifically for each transaction.

Buterin claimed that the idea of a stealth address offers a different kind of privacy than Tornado Cash, which can conceal transfers of popular fungible assets like ETH or significant ERC20s but is very ineffective at doing so for transfers of obscure ERC20s and is unable to add privacy to NFT transfers at all.

Gas costs would be one of the biggest obstacles to stealth addresses as zero ETH would be present in a freshly generated stealth address, making it unable to proceed any further transaction.

The idea behind using a stealth address in the first place would be defeated if ETH were sent to it from another address as it would create a publicly visible link to the main wallet. ZK-SNARKs could be used as a potential solution, however, they have a high gas cost.

Another would be the employment of specialized transaction aggregators, which may provide network users the option of paying for numerous transactions at once and then allowing them to spend these prepaid transactions whenever they like.

Vitalik Buterin did acknowledge that stealth addresses do introduce some longer-term usability concerns, such as the difficulty of social recovery.

Buterin noted, “Basic stealth addresses can be implemented fairly quickly today, and could be a significant boost to practical user privacy on Ethereum.” In the absence of stealth addresses, wallets should offer native privacy capabilities like automated address generation, he added.

Also Read: Vitalik Buterin Wishes Users to Focus on Tech Instead of Price

World of Women Galaxy NFT Collection Sold Out Within a Day

Champions and Guardians are 1/1 NFTs that are a part of the WoW Galaxy collection which are individually drawn by Yam Karkai and not generated. 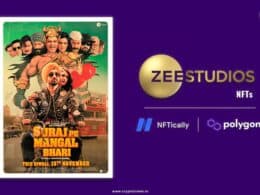 Zee Studios Team Up With NFTically to Launch Its NFT

Zee is offering an NFT of a signed poster from its movie “Suraj Pe Mangal Bhari,” a film about a wedding detective.

The program is aimed to identify security issues in a system designed to reward those who stake ApeCoin and Ape NFTs.

The raised capital will be used in converting the Boss Beauties NFT collection into media IP.
Total
0
Share