Sushi DAO holds Election for the Next Chief Executive

The decentralized autonomous organization (DAO) behind the cryptoexchange SushiSwap is holding an election process for its next Chief Executive and revealed its selection itinerary.

Thus, instead of going by the traditional method of having insiders interview and then selecting a candidate, the DeFi platform’s “Head Chef” will have to go through an election process. The election was ultimately held by holders after a public campaign.

The candidates campaigned and held AMAs ahead of the election on Youtube on 3rd September. On 22nd of September, all 5 finalists will get a chance to debate and defend their answers to team & community questions during the #97th Sushi Forum Call.

On 26th of September, a final vote will be carried out on ‘1 out of 5’ for becoming the Head Chef of Sushi.

Jared Grey, a head chef candidate, said that the election is bringing a lot of transparency into the process, and the whole purpose of blockchain is to bring transparency to areas that conventionally have been opaque. “Finance hasn’t been the most truthful industry over the last few decades,” Grey added.

Andrew Forman, another head chef candidate said, “It’s really crunch time over the next 10 months for SushiSwap.” Forman added that while the DAO does not have the treasury that some of the other DeFi protocols have, the expenses, too, are higher than SushiSwap’s revenue.

In July, the SushiSwap team had put forward Jonathan Howard as the first candidate for the head chef position but Howard dropped out of the election after he announced in a Discord message about him getting a bad case of flu.

The election is a novel experiment in corporate governance and the decentralized business models. The election comes in the wake of Sushi struggling to keep its treasury working.

As the organization continues to be affected by a financial and leadership crisis, the newly elected leader will also bear the responsibility of rebuilding the protocol’s finances.

The fund will invest in metaverse-related companies across the USA, Asia and Europe. 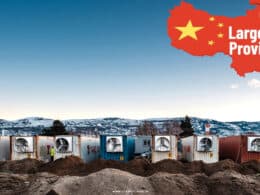 China’s Anhui province is reportedly banning mining due to power shortage in the country.

Grumpls NFT collection is created by well-known as well as budding artists who will not only get royalties for their own work but for the entire project.

Moonpay's concierge service assists the super-rich celebrities to buy crypto and NFTs without even having to set up a crypto wallet.
Total
0
Share