The first Solana scaling solution, Nitro, is expected to launch in early 2023. Nitro is a layer2 (L2) for Solana that brings together both Solana’s powerful execution environment and developer community along with the robust Cosmos and IBC ecosystem.

Nitro is a Solana Virtual Machine (SVM)-compatible blockchain and thus will act as a bridge between Solana and Cosmos. Nitro will allow developers to incorporate current Solana smart contracts, which will be accessed through Phantom and other common Solana wallets.

Sei Labs, which is a startup layer-1 blockchain founded by Robinhood and Goldman Sachs veterans, will allow Solana developers to port their apps to a fresh digital assets ecosystem using Nitro.

Sei co-founder Jeff Feng said that no one has attempted something like this, to their knowledge.

Feng explained “The reason is that, for the longest time, the Ethereum Virtual Machine (EVM) was the dominating development standard that powered the growth of Avalanche, TRON, Polygon, BNB Chain and others.”

Feng further added that by combining it with the Cosmos and the Inter-Blockchain Communication Protocol (IBC) ecosystem, Nitro is the first stepping stone toward making SVM a core development standard, just like EVM is today.

Feng said tFeng said that the move comes months after crypto derivatives platform dYdX said  it was shifting to a Cosmos-based blockchain instead of Ethereum.

Nitro will supercharge DeFi performance on a blockchain that is purpose-built for DeFi. Sub-second finality (600ms) & high throughput (20k tps) are some of the primary features of the solution. 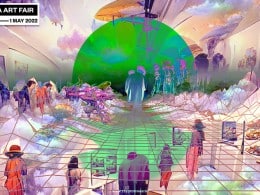 Indian Art Fair to be now Hosted in the Metaverse!

The Indian Art Fair partnered with XR Central to create a digital twin of this year’s fair for a browser-centred 3D metaverse experience.

TPS helped 3AC in coordinating loan agreements with several lenders and was "blindsided" by its demise for being one of the creditors of the hedge fund.

The bank has been using blockchain for intraday repurchase since 2020, conducting transactions worth $300 billion till date.

In the last 30 days, this is the third time when the NFT collection from Bored Ape Yacht Club crossed $1 million
Total
6
Share