Scott Free Productions to Adapt ‘The Infinite Machine’ into a Movie

Scott Free Productions is all set to create the movie adaptation of renowned cryptocurrency journalist Camila Russo’s bestselling book ‘The Infinite Machine’ about the history of Ethereum.

According to a Deadline report, Shyam Madiraju will write the screenplay and direct the film. Executive producers are Francisco Gordillo, co-founder of crypto hedge firm Avenue Investment, and Russo.

“The best introduction to the world of Ethereum,” according to The Wall Street Journal,  the book ‘The Infinite Machine: How an Army of Crypto Hackers is Building the Next Internet with Ethereum,’ was published by HarperCollins in 2020.

It tells the story of how Vitalik Buterin persuaded a motley crew of builders and investors to join him in his project to create a supercharged global computer, the many challenges they faced, and the explosion of both greed and innovation it unleashed.

The Defiant founder Camila Russo stated, “I can’t imagine a better team to turn the riveting story about the people behind the most revolutionary technology since the internet, into a feature film that will capture the hearts of our generation.”

Last year another documentary film Ethereum: The Infinite Garden got announced, and it is set to release in winter 2023. Similar to the Infinite Machine film adaptation, this documentary film explores the innovative real-world applications of the Ethereum blockchain, the die-hard community of enthusiasts and developers, and its creator, Vitalik Buterin.

The BIS establishes five criteria for central banks to consider for CBDC access and interoperability options that could improve cross-border payments.

The U.S. SEC claims that Caroline Ellison and Gary Wang actively participated in defrauding FTX's investors and took action for the scheme's success.

The administration stated that it intends to go "paperless" when dealing with official documents. 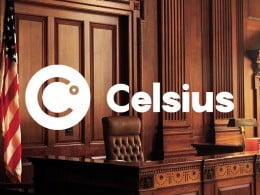 Celsius Clients Ask US court to Recoup $22.5 Million in Crypto

The U.S. Bankruptcy Court for the Southern District of New York received a complaint from an ad hoc group of 64 Celsius custodial account holders.
Total
0
Share