The leading crypto and stock trading app Robinhood revealed its plans to launch a non-custodial crypto wallet with users having direct control over their crypto and access to the decentralized web.

A non-custodial wallet means users will have exclusive custody of the private keys required to control their funds on the blockchain.

Users will not be reliant on Robinhood if the system fails, but they will risk losing all of their assets if they misplace the private key.

Users will be able to trade and access crypto, store NFTs, and earn interest on their crypto holdings with the new wallet.

It will have the ‘same simple and accessible design’ as the rest of Robinhood’s offerings. According to reports, the service will also cover user gas fees.

To cover the gas costs, the company will take a page out its equity playbook and rely on third-party liquidity providers to get the best deal on a given swap.

The wallet will also enable multi-chain support, probably for the 11 crypto assets that Robinhood supports.

Vlad Tenev, co-founder and CEO of Robinhood, stated “With our web3 wallet, we’re building a product that will satisfy the most advanced DeFi believers while creating a secure on-ramp for those who are just starting out in crypto to go deeper into the ecosystem.”

Last month, Robinhood launched its first crypto wallet which had a waitlist of 2 million users when it originally opened some months ago. Because the first wallet was custodial, Robinhood had total control over user funds.

Robinhood claims its non-custodial wallet will be released in beta later this summer, and anyone interested in trying it out should sign up for the wait list. The final launch will take place before the end of the year. 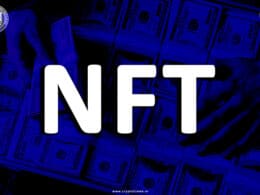 The US Treasury Dept. Weighs in on Illicit Finance through NFTs

According to a new study by the US government commenting on money laundering and FATF regulations, the rapid growth of the NFT market raises new issues.

On Friday, the minister said, "I am not going to legalise it or ban it at this stage. Banning or not banning will come subsequently, when consultations give me input".

Last year, developers at the DFINITY Foundation started the process of integrating the Internet Computer blockchain with the Bitcoin network.

Anonymous CryptoPunk owner tries to make his NFT the ‘Most Expensive Art’ in human history with a half-billion dollar transaction.
Total
0
Share