Nickelodeon Hints at an NFT Drop with Recur Platform

The American-based cable television channel focused on children’s programming, the legendary Nickelodeon, is hinting about an upcoming NFT drop in collaboration with Recur NFT platform based on Polygon blockchain.

Recur is also giving out commemorative Nick Day 1 Roles in their Discord channel to celebrate the launch of Nick’s NFT account launch.

Although nothing is known about the first wave of Nickelodeon NFTs, the platform’s promo videos suggest that the NFTs would center on classic Nickelodeon shows like Rugrats and Hey Arnold!

Paramount filed an application with the US Patent and Trademark Office (USPTO) earlier this year to register the trademark for SpongeBob SquarePants NFTs, which is still pending.

The news comes after Funko released Nickelodeon NFTs earlier this month, which were sold out within minutes. The first wave was missing the iconic SpongeBob though.

The Nickelodeon fans are already giving polarizing responses regarding the NFT drop with some already excited about the news but few others are unhappy citing the environmental impact of NFTs.

The NFTs feature a battered and torn AC Milan jersey from the 2016-17 football season. 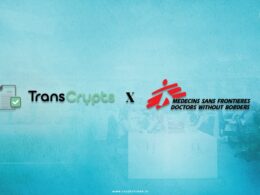 TransCrypts Partners With DWB to store Medical Records On Blockchain

TransCrypts has created a whole new realm in how medical records are stored and accessed by using the Blockchain.
Total
1
Share