The surge in the popularity of bitcoin has also provided more opportunities for dishonest actors to take advantage of all the flaws in the cryptocurrency ecosystem and defraud those who do not know what they are getting themselves into.

Fraudsters have been successful in stealing over $7.8 billion worth of cryptocurrencies throughout the course of the past few years. This figure more than quadrupled in 2021, when scammers were able to take over $14 billion of bitcoins.

Every day, new forms of cryptocurrency-related cons appear, and if you’re not cautious, you could wind yourself falling for one of them. Here, we have listed the 5 most common crypto scams that you should be aware of.

New users of cryptocurrency run the risk of falling victim to scam websites that promise “huge” returns on their investments or lucrative mining opportunities. Many of these sites give off such a realistic appearance that you can be persuaded to believe that your capital will undoubtedly increase if you visit them.

Although it can be simple to make the investment, it is quite unlikely that you will ever see a return on your money due to the fact that con artists keep all of the money and close down the website as soon as they have amassed enough for themselves.

Scammers can, in many instances, pose as legitimate businesses and develop websites that are almost identical in appearance to the websites of legitimate firms in order to defraud unsuspecting customers.

Scammers make extensive use of phony mobile applications as another common method for defrauding cryptocurrency users.

For example, con artists were able to fool users of the popular crypto-asset exchange application Poloniex by uploading an app to Google Play with a name and user interface that were nearly identical to Poloniex’s.

Even though the company did report the phony app, by the moment it was finally taken down, more than 10,000 of the company’s customers had already installed it, putting the safety of their accounts at risk.

Emails are also faked in an effort to make it appear as though they came from a reliable and authentic source in order to trick people into opening them. The majority of these emails request “urgent” payments be made using cryptocurrencies.

The goal is to instill a sense of hurriedness in the user so that they respond to the email without considering it thoroughly but rather immediately.

Scammers now have more opportunities than ever to steal their money because of the unexpected rise in the number of new crypto-based investments such as initial coin offers (ICOs) and non-fungible tokens (NFTs).

For instance, con artists can send emails to their victims claiming to be from a genuine cryptocurrency company and giving you a special deal that is only available for a limited period.

In other instances, the founders of nascent cryptocurrencies may distribute coins that are not yet regulated by the appropriate authorities or may deceive investors about their goods through the use of false advertising.

Scams that include giving away cryptocurrency are pushed on social media platforms like YouTube, Twitter, and Facebook, amongst others. These freebies nearly always appear to come from celebrities or notable persons inside the crypto industry.

In the giveaways, fraudsters claim to double or equal the money provided to them using well-crafted communications and real social media accounts. Most of these freebies have an urgency about them with a temporal limit set on them and they look to be a once-in-a-lifetime chance.

In 2022, impersonators of Elon Musk stole more than $2 million worth of cryptocurrencies from unsuspecting victims.

While there have been numerous genuine giveaways on social networks as well, it might be difficult to identify the frauds from the honest ones. Before you start working with them, you need to ensure that you have done your homework and conducted an adequate investigation.

Scammers may lure investors and traders with promises of doubling up their holdings. In reality, there is no such online marketplace that can offer such huge returns. Though the offer might seem genuine, you won’t realize it until you lose your deposit. Always do some research before entering any personal information or account details in any online marketplace.

To make it simpler for people who are interested in cryptocurrencies to buy things online, a lot of eCommerce websites are beginning to openly accept bitcoin as a means of payment. However, this does not necessarily imply that any and all sites that purport to take cryptocurrencies are in fact legitimate.

Swindlers might deceive naïve clients into thinking they are making transactions using cryptocurrencies by creating false seller accounts or a whole fabricated marketplace. After they have received their victims’ orders, the con artists would either remove the online marketplace entirely or replace the genuine goods with counterfeit versions.

Also Read: The 10 Most Common NFT Scams and Techniques to Avoid Them

As a result of the widespread use of cryptocurrencies around the world, con artists have become more resourceful in their attempts to take advantage of naive cryptocurrency traders and investors.

However, even if you have some experience with cryptocurrency, you should not assume that you are exempt from falling for questionable schemes. Keeping up with the most current news items on the fraudulent use of cryptocurrencies and their theft can be difficult.

Scams involving cryptocurrencies are becoming increasingly sophisticated, yet there are methods for avoiding falling victim to one of these schemes. While embracing cryptocurrency has assumed greater significance in the digital world of today, defending your company against fraudulent cryptocurrency transactions is of equal significance to preserving the integrity of your brand.

Exploring CeDeFi: The Merge of DeFi and CeFi

CeDeFi: the merge of DeFi and CeFi concepts is a relatively new term, but it is already being…

Everyone has been caught off guard by the unexpected surge of NFT excitement, but what grabs attention is… 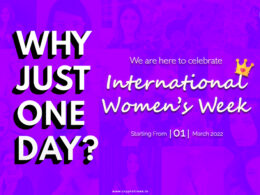 On March 8th, every year, we celebrate International Women’s Day devoted to celebrating and recognizing women’s accomplishments, no…

CryptoPunks are collectible crypto art pieces represented on the Ethereum blockchain using NFTs. Their original intention was to…
Total
0
Share