Solana based NFT marketplace, Magic Eden, launches ‘Magic Ventures”, which will be completely based on investing in Web3 gaming.

Tony Zhao was appointed as the new head of gaming investments to help Magic Eden fund promising games and gaming infrastructure, which will boost the growth of Web3 gaming.

Zhao also mentioned that few investments are underway but would not reveal the projects they had invested into.

Jack Lu, CEO of Magic Eden, stated, “The world of gaming is a massive market that has just started to venture into the world of Web3. We intend to deepen our relationships with both gamers and game developers”.

With this formation of professional gaming and Esports experts such as Tony Zhao, Yoonsup Choi, Harrison Chang, and Matt Biamonte. Magic Eden will have knowledge of both traditional gaming and NFTs which will be helpful for their users.

After its launch the gamers will be able to buy and sell NFTs within each game without the need to go to an external marketplace, this is aimed to give users hassle-free gameplay.

The crypto unicorn, Magic Eden was valued at a little over $1 billion. Eden games have helped over 50 games and seen over 310,000 users mint or trade gaming-related NFTs on the Company’s marketplace.

Just after 9 months since its inception, Magic Eden clocked $130 million last month to raise its valuation to $1.6 billion.

Now, Magic Eden aims to build a top Web3 gaming-compatible NFT platform enabling game developers to execute their vision and for players to discover new games and connect across other digital cultures.

Subscribe to The Crypto Times, for more NFT news.

The investigation on Celsius is still in its initial stages and the U.S. SEC is also getting involved aside from the other regulators. 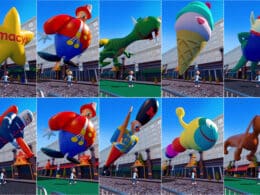 The 9,510 Macy's Parade NFTs will be distributed at random and will be available in three levels of rarity: Classic, Rare, and Ultra Rare.

A total of 7394 editions of XCOPY’s MAX PAIN NFTs were sold on the Nifty Gateway platform.

In the attack, 17 users have lost their NFTs from addresses, and the perpetrator earned $1.7 million after reselling some NFTs.
Total
6
Share