Banksy’s “Love is in the Air” Sold For $12.9M At Sotheby’s Auction House

The art piece “Love is in the Air” by Banksy sold for $12.9 million at Sotheby’s auction house. The winning bidder can pay the price for Banksy’s iconic protest image in cryptocurrency.

The auction involved 4 bidders with a 14-minute bidding battle. The initial estimate of bidding was in the range of $3 million to $5 million. Sotheby’s auction house for the first time accepting the cryptocurrency Bitcoin and Ethereum as a payment option for the physical piece of art. The auction house announced before that they will allow their bidders to pay in cryptocurrency or dollars.

Sotheby’s announced on Twitter that the auction house involved a 14-minute bidding battle between four entities.

According to auction lot pages, bidders could pay using two cryptocurrencies, Bitcoin and Ether, through Sotheby’s partnership with Coinbase.  Auction house underlines that first-time cryptocurrency accepted as a payment for a piece of physical artwork.

“The Funds must be sent from an approved wallet or exchange, including Coinbase, Coinbase Custody Trust, Fidelity Digital Asset Services, Gemini or Paxos,” The auction house noted. 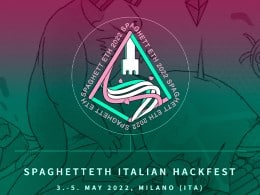 The hackathon is divided into categories; each representing a bounty and is open to attend by tech and non-tech people.

The report also says that stablecoins are emerging as a complement to the existing payment ecosystem, with market cap hitting $190 Billion in early 2022.

Binance’s NFT ticket holders will receive 10% off any purchase made at the Lazio store and 20% off tickets to the club's Europa League games.

Huobi may also lay off 30% of its workforce due to "a sharp drop in revenue" because of the removal of all Chinese users.
Total
0
Share