The founder and CEO of Huobi Global, Leon Li (Li Lin), is reportedly looking to sell his more than 50% stake in the company, as the exchange struggles with revenue.

According to Chinese journalist Colin Wu’s tweet, Lin has decided to liquidate his majority stake in the cryptocurrency exchange, indicating that he “currently holds more than 50% of the shares.”

The reports also suggest that the crypto company may also lay off 30% of its workforce due to “a sharp drop in revenue” because of the removal of all Chinese users.

A platform spokesperson commented, saying, “Due to the current market environment, Huobi Global is in the process of reviewing both its hiring policies and its current manpower, with the goal of re-aligning them to its operational needs. Further to such review, layoffs are a possibility.”

Huobi Global is a leading cryptocurrency exchange with a significant presence in Asian markets.

Huobi was founded in 2013 in Beijing, but because of changes in the Chinese regulatory landscape, it was forced to move its crypto trading services outside China in 2017.

After Lin, the Chinese branch of Sequoia is Huobi’s second-largest shareholder.

Layoffs have been a problem in the crypto industry, with companies such as Blockfi, Coinbase, Gemini, Bybit, and Celsius laying off employees.

Huobi Global allegedly closed all of its Singapore-based users’ accounts on March 31, 2022, after announcing in November that Singapore would be included as a restricted jurisdiction.

Last month, the crypto exchange announced that it would cease operations in Thailand on July 1, and the recent revelations cast doubt on the platform’s profitability.

The perpetrator snatched around 5000 ETH from the linked address to the new address and sent it to Tornado Cash in the batches of 100 ETH.

According to Tekin Salimi, the dao5 crypto fund will be transitioned into a DAO by the year 2025. 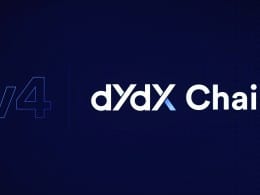 dYdX v4 Shifts to Cosmos Ecosystem Instead of Ethereum

With the aid of Cosmos, dYdX v4 will offer a full combination of decentralization, scalability, and customization.

The head of engineering at BNP Paribas, Joe Bonnaud, said that the bank’s adoption of Onyx was more than just an exploration of a proof of concept.
Total
1
Share