FTX US to Acquire BlockFi in a $240 Million Deal

The crypto winter showed us how even the giants in the industry could be shaken as now leading cryptocurrency exchange FTX US is going to acquire BlockFi at a variable price of up to $240M based on “performance triggers.”

FTX US will also offer a $400M rolling credit facility to BlockFi. This is in addition to the $250M credit line FTX offered the company last month.

According to the announcement, “This, together with other potential considerations, represents a total value of up to $680M.”

BlockFi CEO Zac Prince stated that the company was negatively impacted by the volatility of the cryptocurrency market, particularly due to Celsius and 3AC.

Despite the fact that BlockFi had no exposure to both the firms, Celsius’ withdrawal halt caused a spike in client withdrawals from BlockFi’s platform, says Prince.

According to him, Three Arrows Capital which has now filed for Chapter 15 bankruptcy caused a surge of withdrawals in BlockFi as clients lost faith in lending services, which in turn sparked BlockFi’s own insolvency issue.

BlockFi lost $80M as a result of 3AC liquidation “which is a small fraction of losses publicly reported by other lenders.”

Prince continued by saying that even though the companies had reached a $680M agreement, BlockFi had not used any of the credit lines yet. He stated that the company’s fundamental belief is in preserving client funds.

“We are incredibly proud of what this transaction represents for BlockFi, for our clients, and for the crypto ecosystem as a whole. Stay tuned for more to come!” the announcement reads.

Also Read: BlockFi CEO Refutes Claims of FTX Buying it Out for $25M

After a private funding round in July 2021, BlockFi was valued at $4.8 billion. Last month the company had to lay off about 20% of its total employees i.e around 170-200 employees amid the market collapse.

Argo Blockchain files to List Its IPO on The NASDAQ

The shares of Argo will appear under the ticker “ARBK”.

The NFT collection is being designed to demonstrate the 3D viewing capabilities of Sony’s Spatial Reality Display.

Brian Brooks Resigned As The CEO of The BinanceUS

Despite differences over strategic direction, I wish my former colleagues much success. Exciting new things to come! 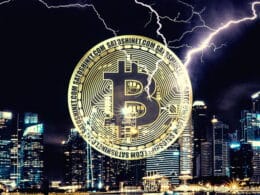 Bitcoin Lightning Network About to Reach 700M Users by 2030