‘Father of the Metaverse’ Neal Stephenson to Unveil Lamina1 Blockchain

The Metaverse is a virtual urban environment that can be accessed by a worldwide fiber-optic network and virtual reality headsets, as depicted in Stephenson’s novel Snow Crash celebrating its 30th anniversary this year.

The former Bitcoin Foundation chairman Vessenes will be Lamian1’s CEO while Stephenson will serve as the chairman of the platform.

They both intend to launch a new immersive environment based on Snow Crash, as well as construct infrastructure and release tools to help third-party producers create Open Metaverse experiences at scale.

Vessenes describes Lamina1 as “a place to build something a bit closer to Neal’s vision — one that privileges creators, technical and artistic, one that provides support, spatial computing tech, and a community to support those who are building out the Metaverse.”

Lamina1 will serve as a base layer for the Open Metaverse. The blockchain plans to deploy a testnet and then a betanet later this year.

Neal wants to help creators get paid fairly for their work, aid the environment, and see a truly Open Metaverse emerge rather than the Metaverse vision being put forward by monopolies.

The reportedly carbon negative Lamina1 chain will have large transaction volume and an economic architecture with new reward mechanisms to assist innovators and entrepreneurs in creating ideal economies.

Vessenes hopes to contribute economic and technological design to Neal’s vision that will allow Lamina1 to be developed sustainably and to deploy Lamina1 quickly as the processes to make it happen come together.

Tony Parisi, the former head of AR/VR at Unity, and Advisor Rony Abovitz, founder of Sun and Thunder also joined the Lamina1 team along with Stephenson and Vessenes.

Stephenson also shared a few tidbits about Metaverse via Twitter. He believes that the current game development is still centered on screens for both the developer and the user, and that in the Metaverse, a hybrid method that includes both 2D screens and AR/VR technology, rather than just VR, will be used.

‘We fluently navigate and interact with extremely rich 3D environments using keyboards that were designed for mechanical typewriters. It’s steampunk made real. A Metaverse that left behind those users and the devs who build those experiences would be getting off on the wrong foot,” he tweeted.

Subscribe to The Crypto Times for more Metaverse Updates!!

The NFL finally enters the crypto universe, although with restrictions and a complete control over the process.

The platform also plans to collaborate with local crypto users, communities and crypto platforms to boost crypto adoption across the country. 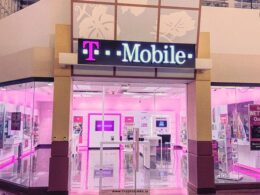 T-Mobile Looks into The Potential Data breach of Its customers

In Brief: “T-Mobile USA. Full customer info,” the seller told Motherboard in an online chat.  The seller is…