According to the report, Goeril was the third and last testnet to merge that transit the network into a proof-of-stake (PoS) consensus on a trial basis.

Ethereum core developer, Tim Beiko spread good tides about the success of the Goeril testnet merge by posting a screenshot of pandas with ‘POS ACTIVATED’ on the coding page.

Ethereum Merge will be obtained through two sequential upgrades, Bellatrix and Paris. Among these two, the Paris upgrade will mark the end of the Ethereum Merge.

During the Consensus Layer Call on August 11, Ethereum core developers agreed on the tentative date, September 6 to reach the 144896 epoch for the Bellatrix upgrade. For the Paris upgrade, they are seeing September 15 to hit a Terminal Total Difficulty (TTD) of 58750000000000000000000.

However, these dates are not confirmed yet, as they are tentative because of possible fluctuation in block times and hash rate in upcoming days.

Yoseo to Launch the First NFT Pawn Shop in Metaverse

Pawn Shop locations will be across Decentraland and The Sandbox and the NFT owners would be rewarded on a monthly basis.

As per the Bloomberg report, the parent company of Grayscale and troubled crypto lender Genesis, Digital Currency Group…

The total exposure to Sollet-based assets in circulation on Solana is valued at approximately $40 million. 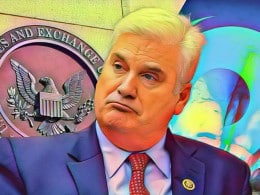 Emmer argued that OFAC's sanctions on the Tornado which is as per the Executive Order, are the first sanctions issued against something other than a person/entity.
Total
15
Share