Are We In a Crypto Bear Market?

There is no room for doubt that the current crypto market is seeing the worst downfall of its lifecycle. After an outstanding performance over the last year, recent events have led us to an unexpected crypto bear market.

The so-called “Bear Market” situation in the cryptocurrency markets is real, and the recent wave of liquidations indicates that a crypto winter and market crash may be about to start.

But do you know what is the bear market condition? Well, Bear Market is the condition where securities (in this scenario it is the crypto market) prices fall below 20% or more than that from their recent high.

In late 2021, the cryptocurrency market’s total capitalization was around $3 trillion. This number is now dropping to $1 trillion. Bitcoin and Ether markets are currently down to 35% and 43% respectively.

Generally, whenever a bear market condition takes place, it stays 13 to 27 months long. Obviously, the downfall during a bear market is not fruitful for the crypto investors, but still, I would like to say it feels like a frisson.

How did Crypto Market Land in a Bear Market Situation?

So after the prominent cryptocurrency had seen the milestone of an all-time high (ATH) in November 2021, the crypto market again started to slip into the abyss.

This wave of bear market conditions, on the other hand, did not come on instantaneously. Several elements and causes have emerged in the previous seven months that have accelerated the crypto market’s slump.

Reportedly, some crypto market analysts and researchers believe that the crypto markets are traversing through the second phase of the bear market condition. It all started with the LUNA’s disastrous meltdown following the UST’s de-pegging issue when crypto investors were enjoying a partial bull market.

Similar pattern turbulence had also been seen on TRON’s stable coin algorithm USSD. However, Justin Sun – the founder of TRON withdrew 2.5 billion TRX from Binance by injecting $220 million. This was the countermeasure to prevent the de-pegging issue in USSD after noticing a 30% price fall in its collateral token TRX in the previous seven days.

UST downfall also surged domino effects in Celsius (CEL) and then into stETH: ETH peg. The panic selling was intensified after the Celsius Network’s announcement to suspend withdrawal and transfer of the crypto assets locked inside amid its liquidation fear.

The tsunami in the crypto market smashed many crypto platforms and firms. Some of the Hedge funds Three Arrows Capital, or 3AC for short, could end up being the latest scalp as rumors swirled over its impending demise owing to losses connected to the deep slump in Bitcoin, Ether, and other altcoins.

According to a report from Analytics Insight, 10 major cryptocurrencies including Terra, TerraUSD, Zcash, Cosmos, ApeCoin, Elrond, Avalanche, Cardano, and Uniswap may be dead in this situation. Crypto-centric stocks such as Coinbase, RobinHood, and Microstrategy continue to be hammered.

Although, some crypto analysts believe that the bear market condition will prevent bad actors from the crypto space.

The largest Bitcoin holder Microstrategy is also in danger as its average bitcoin price is around $30,000. At the time of writing, Bitcoin is trading around $21,207.94. Due to the huge price gap between buying and selling, Microstrategy is currently facing a possible margin call in wake to maintain its Bitcoin-backed loan.

In a tweet, Michael Saylor had stated that Microstrategy can HODL bitcoins to the value of $3,500. And even after that, the company can post more collateral to avoid liquidations. However, if the company fails to add collateral, then all its Bitcoin-backed loans will be liquidated.

Some reports suggest that the current bear market condition could compel Microstrategy to sell its over 120,000 Bitcoin holdings. If this happens, then the crypto market will experience a lot of aggravation.

Hedge fund Three Arrows Capital, or 3AC for short, could end up being the latest scalp as rumors swirled over its impending demise owing to losses connected to the deep slump in Bitcoin, Ether, and other altcoins.

The current deterioration in the crypto market has turned into a survival dilemma for several platforms. Let’s look at some of them :

Another big Crypto Hedge fund venture, Three Arrows Capital (3AC) is almost facing a survival issue in this financial storm. As per the reports, 3AC has allegedly failed to meet margin calls from its lenders, which can push them towards insolvency.

Reportedly, 3AC has borrowed a loan from the lending protocols such as BlockFi, which the platform failed to repay. In a bid to save its platform from liquidation, 3AC has exchanged stETH for USDT in numerous exchanges. Some rumors also circulated in the market that 3AC has leveraged customers’ funds to qualify for margin calls.

Centralized exchange, Celsius is continuously under the threat of contagion effect and cascading liquidation in this ongoing financial crisis. Currently, Celsius has over 1.7 million users on its platform. The report disclosed that Celsius has an outstanding $231 million loan borrowed from DeFi lending protocol Maker.

Celsius is currently striving to dodge the liquidation scenario by topping up more wBTC as collateral for the vault instead of closing its position. However, it could become impossible for Celsius to avoid such a scenario if the Bitcoin market price falls below $14,003.16. At the time of writing, Bitcoin is trading around $20,424.62 (-1.76%) according to CoinMarketCap.

In order to protect MakerDAO from the threat of liquidation of many staking and lending platforms, it raised a proposal to pay off debt and cut down DAI supply for Aave. The proposal got a majority voting in favor.

This move from Maker came after the threat arose in the crypto ecosystem over Celsius, and a proposal from Aave to protect other market participants.

Ray of Hope is Still Alive

We cannot deny that the crypto winter is unfolding due to the current bear market environment. But don’t lose sight of the fact that there is still hope. Many academics and crypto enthusiasts are comparing the crypto winter to the dotcom bubble crash, which occurred when internet technologies were only beginning to spread over the globe.

During the dotcom bubble burst, internet stocks fell down from their peak value in the market. Furthermore, numerous companies failed to survive during the internet bubble burst including Pets.Com, Webvan, Boo.Com, and others. Also, companies that survived such as Cisco.com, had experienced an 80% crackdown on their stocks.

But now, companies that successfully went through the internet bubble burst, are now holding their different legacy and reputed growth in the market. We can take the names of companies like Microsoft, Amazon, eBay, Qualcomm, and Cisco as survival from that bubble burst.

All of them are now on the list of big companies!!

The bear market condition in crypto seems pretty much the same. Crypto experts believe that the bubble burst was expected in the crypto market and it will eliminate so many bad actors and inefficient players from the market.

They believe that the bear market condition will compel the companies to aim for the efficient and worthy development to top on the blockchain and web 3.0 space in spite of just playing the valuation game.

“We’re in a bear market. And I think that’s good. It’s good because it’s going to clear the people who were there for the bad reasons,” said Bertrand Perez, CEO of the Web3 Foundation.

“It’s good also because all those projects are gone. So the legit ones will be able to focus only on developing on building and forget about the valuation of the token because everyone is down.”

All in all, some portion of the world is still believing in the growth and tendency of some cryptocurrencies such as Bitcoin, Ethereum, and others.

The Crypto Bear Market condition is not favorable for short-term crypto investors and crypto platforms. Major cryptocurrencies such as Bitcoin, ETH, and others are seen to witness a record-breaking crackdown in the market value. So, the burning issue on everyone’s mind is ‘Will Crypto Survive The Bear Market?’

Are NFTs changing the Face of the Sports World?

As non-fungible tokens (NFTs) are phenomenally changing the landscape of art, they have become huge billboards for markets…

Over 250 teams have requested developer launch access, which can save a lot of gas in the Ethereum… 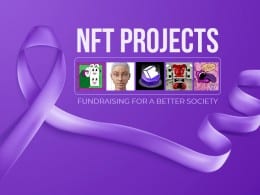 So far, NFTs have been an excellent way for people to sell digital assets. NFTs can also make…

Most cryptocurrency investors prefer a “buy and hold” strategy, hoping that their portfolio will “go to the moon”…
Total
1
Share