They’re just a blockchain record that allows collectors to create a digital collection with each item traceable back to the original issuer.

The majority of NFT coins were created utilizing the ERC-721 and ERC-1155 Ethereum token standards. But apart from Ethereum there are few more blockchains yet to explore about.

While I’ll go over a few of the more recent and imaginative applications, there are so many more that this article will only scratch the surface.

Unlike the famous Ethereum blockchain, Solana is not so known by outsiders other than people inside the crypto industry.

It is known to be one of the fastest blockchains in the world. We can see a case like this where the Bitcoin blockchain handles about 7 transactions per second, Ethereum (ETH) handles 30, whereas Solana handles around 65 000 a second.

Solana is not only ultra-fast and economical; it is censorship resistant. This means that the network will remain open for applications to run freely and transactions will never stop.

In addition to that, even the transaction fees are really less, which costs less than $0.01 for both developers and users.

The blockchain offers around 193 projects. Among all this, #1355 Solana Monkey, which depicts a skeletal monkey donning a colorful crown, is the most expensive Solana NFT that was sold for $2 million.

Although both Tezos and Ethereum are decentralized ledgers and smart contract platforms implemented on top of a blockchain, in spite of having these similarities, they still differ in many ways. Tezos is shortly known as XTZ.

First of all, Tezos has the potential to evolve faster as compared to Ethereum 2.0. Secondly, the network can be upgraded without a hard fork.

Also, as per the recent “Delphi” upgrade, the gas cost for Tezos may be reduced by 75%. Whereas in the case of Ethereum, the gas fees may cost somewhere around $50 to $100 and sometimes even more than that.

With the growing trend of NFTs tezos blockchain also implemented standards for NFTs. Right now, Tezos offers to trade NFTs at different marketplaces such as HEN, Kalamint, Bazaar, and OneOfNFT.

Since Cardano was created by the co-founder of Ethereum Charles Hoskinson, Cardano and Ethereum share many similar features.

The major advantage that Cardano has over Ethereum is that Cardano already runs on a PoS network whereas Ethereum now is going to transform from PoW network to Pos network. This makes Cardano faster and better eco-friendly than Ethereum.

Also, the recent upgrade of Alonzo hard fork would help anyone to design and deploy their own smart contract.

As per its website, its ecosystem consists of over 120 NFT projects.

TRON is known as the future of blockchain technology. TRO is developed with a few basics from Ethereum blockchain.

Additionally, the transaction fees are comparatively much lower. TRC is its native token.

TPunks (Tron Punks) was launched shortly after the TRC 721 token was released and was the first NFT project of TRON. The original Crypto Punks were immortalized by TPunks. There are approximately 10,000 TPunks.

The “Joker” TPunk (#3442) earned a remarkable $10.5 million. Justin Sun, founder of the Tron Blockchain was the one who made the purchase.

Flow is a blockchain built for large-scale scalability without the use of sharding techniques, allowing for rapid and low-cost transactions in dapps like NFT markets and crypto-infused video games.

The multi-node architecture of Flow allows for vertical scaling.

CryptoKitties will soon transit to Flow, and with the meteoric rise of Dapper’s NBA Top Shot and a slew of other developers flocking to Flow amid the NFT craze, it could emerge as one of the most popular blockchains for such projects.

Flow employs a proof-of-stake consensus process, which requires validators to stake a specific number of FLOW tokens in order to join the network.

LeBron James “Cosmic” Dunk #29 is the most expensive NFT sold under the FLOW blockchain in February 2021.

Ripple is a digital payment network and system based on the blockchain, with its own money, XRP.

Ripple has teamed up with MintNFT, Mintable, and VSA Partners to provide developers with a smooth NFT experience. On the XRP Ledger, Ripple is launching a $250 million fund to research innovative NFT applications.

For those who are doubtful of bitcoin’s benefits, blockchain holds a lot of promise for a variety of uses.

NFT can be thought of as a unique, digital form of a certificate of authenticity that is publicly certified by the blockchain.

Although there are many more blockchains available, primarily Ethereum is used for creating NFTs.

Blockchain’s unique application of cryptography and record-keeping will undoubtedly become an essential tool for tracking and securing data. In the coming years, I’m excited to see what blockchain technology could do more. 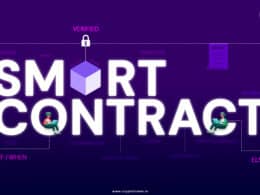 Smart Contract And Its Future Prospects In The New World

A smart contract is an agreement between people in the form of computer code which run on the blockchain, so a public database stores them which anyone can check.

The balancer is an automated market maker (AMM) protocol built on the Ethereum blockchain. It has its own…

13 Most Expensive NFTs Sold Around The World

Since the $69.3 million deal of Beeple made headlines, NFT has made a big fuss. Recently, CryptoPunks gained…
Total
7
Share